The Eastern Economic Corridor (EEC) Development Plan under scheme of Thailand 4.0 aiming to revitalise and enhancing of the well-known Eastern Seaboard Development Program that had supported Thailand as a powerhouse for industrial production in Thailand for over 30 years.

Under this initiative, the Eastern Economic Corridor Office of Thailand (the EECO) has been assigned to drive the country's investment in up-lifting innovation and advanced technology for the future generation. The EEC Development Plan will lead a significant development and transformation of Thailand's investment in physical and social infrastructure in the area.
The EEC project will, initially, be focused in 3 eastern provinces namely Chachoengsao, Chonburi and Rayong. Regarding this, the EEC Policy committee is the primary Royal Thai Government collective force chaired by Prime Minister of Thailand.

Exemption from corporate income tax for up to 15 Years.

Exemption of import duties on machinery

Exemption of import duties tax on machinery, raw or essential materials that import for using in production and R&D.

Have the rights to make the state's land lease agreement for 50 years, and renewable upon approval for further 49 years.

One-stop service centre to facilitate foreign investors which provide useful information and issue the permits for trading, export and import in one location.

Permission to own land

Permission to own land for BOI promoted projects.

Get the Matching Grants for investment, R&D, Innovation development and human resources development in targeted industries.

For executives, specialists and researchers who qualified by the Director-general of Revenue Department under the law which related to the nation's competitiveness enhancement in the promoted businesses or The Investment Promotion Act. 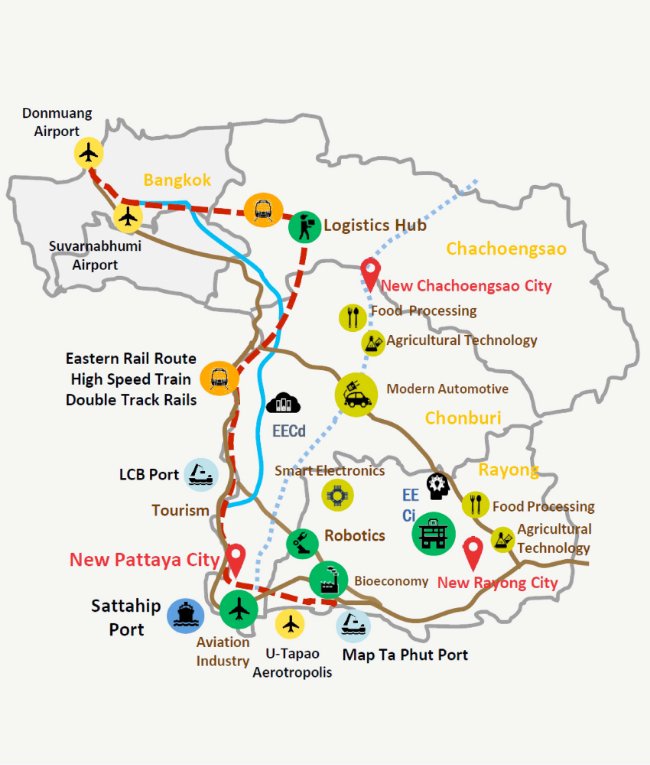 Chachoengsao, Chonburi and Rayong Provinces have been designated for the development of the Eastern Economic Corridor (EEC), a pilot project for the economic development of Thailand's Eastern Seaboard. Over the past 30 years, these three provinces have been developed to support the fast growing industries. It was the "eras of industrial revolution". In 1987, Map Ta Phut industrial estate was established and it was the beginning of the development of Thai heavy industry, such as petrochemical, auto and electronics industries. These eras are also called Thailand 3.0. Today, Thailand is ready to move forward to the era of Thailand 4.0.

The EEC area covers over 13,000 Km2. The government has launched measures to support and accelerate the economic growth in the EEC, for instance, measures to develop public utilities, transportation systems, logistics, human resources, and investor's facilitation in the form of One-Stop Service Center.

In the future, the EEC will grow into a modern metropolitan, a hub of trade and investment, a center for regional transportation and logistics, a significant source for human resources, a tourist attraction and most importantly, the most modern Gateway to Asia.